Unlike ungulates (deer and elk), bighorn sheep rams start growing their horns at birth and continue to grow their horns throughout their lifespan. They do not shed their horns like ungulates shed antlers. Instead, their horns grow until the animal dies. Within each horn there is a living core that provides a continuous flow of blood beneath the hard sheath. The horns are made of keratin, which is the same material that fingernails and hooves are made of, and is a fast growing substance. 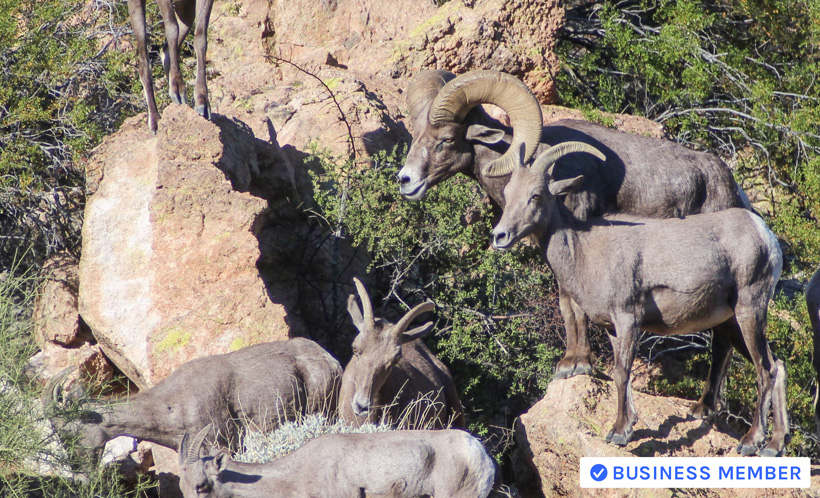 Six year old bighorn ram with a group of ewes.

Rams’ horns typically grow tremendously until the ram gets old and fully mature. At this point, the horn growth slows down quite a bit. Yet, as the ram becomes fully mature, the horns grow more in mass, becoming thicker. As the bighorn rams age and go through the summer and winter a growth ring is created. For each year that passes, a ring is reflected in a ram’s horn and is often referred to as “growth rings” or “annuli rings.” 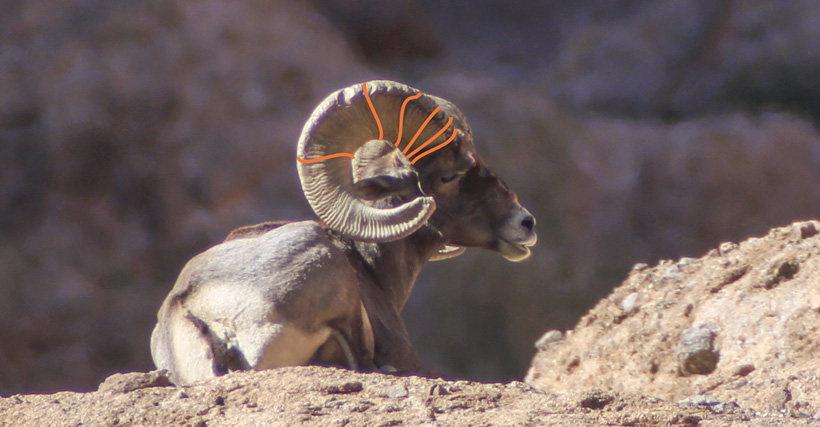 The ring is created when the animal is under stress, which is usually caused by rutting or mating rituals in which they are not thinking about feeding and maintaining their nutrition, but only trying to breed the opposite sex. For desert bighorns, the ring is created in the summer; for Rocky Mountain bighorns, the ring is created in the winter. These seasonal rings directly correspond with their respective mating seasons. The first part of horn that a ram grows is called a “lamb tip,” which usually gets broomed off as the ram’s life continues. Brooming occurs when a ram rubs, wears or knocks off his horn because of eating, fighting and rubbing their horns. 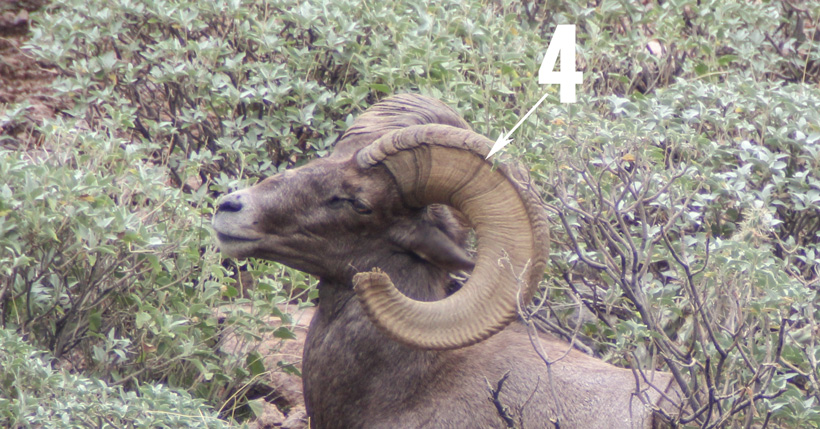 Counting rings is the best way to age a bighorn ram. The most important thing to look for when aging a bighorn ram is the four year ring. This is the most predominant dark and discolored ring. Four years old is said to be when bighorn rams have matured enough to start effectively mating. This creates the first major stress on their body, which then creates a deeply dark and discolored ring. See the photos above and below depicting the growth/age/annuli four year ring on a bighorn sheep. 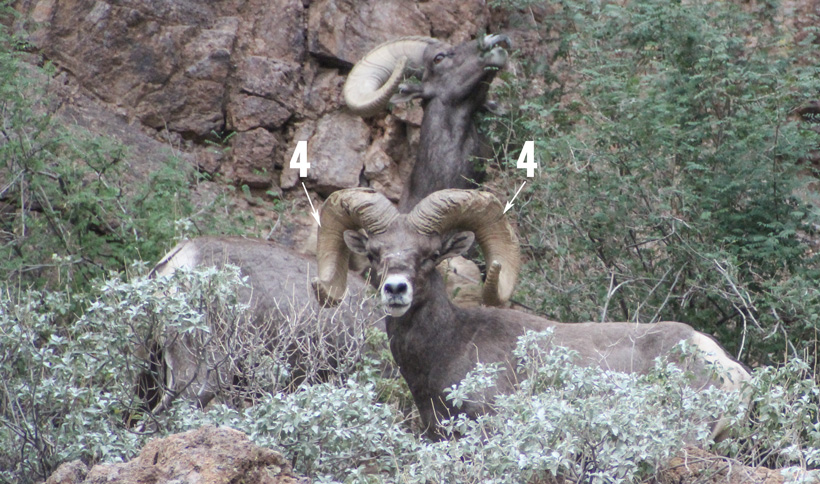 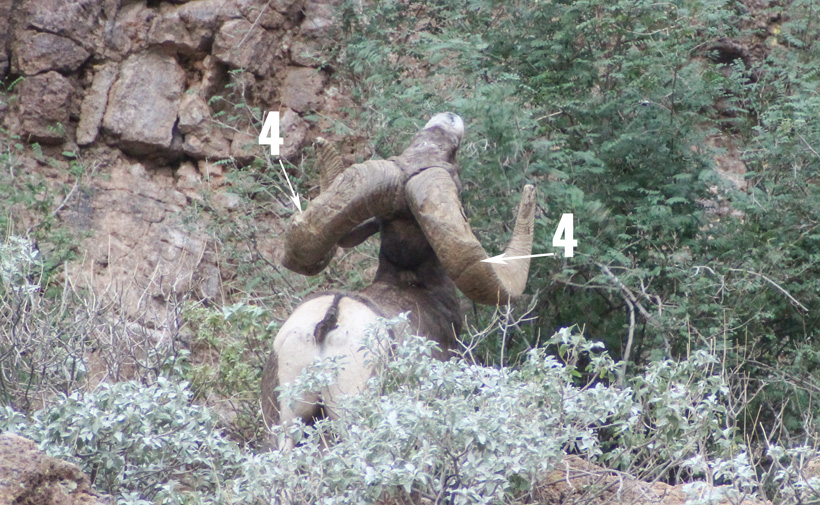 To age a bighorn sheep, look for the four year ring and then count the rings toward the skull from there. Once you are able to quickly identify the four year ring, aging rams becomes easier. You may notice that most of the time, the growth throughout the horns will be spaced differently. This reflects the quality of nutrition that the animal experienced during that year of his life. 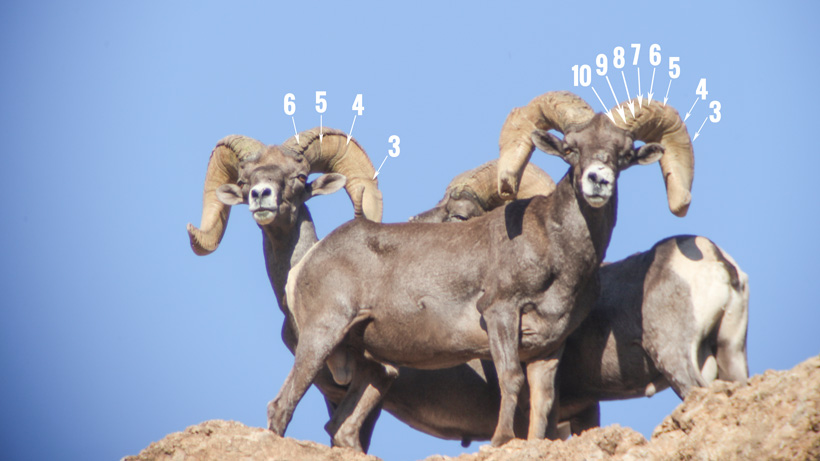 Also, as the bighorn ram matures to about eight years old, the ring gaps become smaller and smaller. Once the ram reaches a certain age, the horns will continue filling out in thickness and mass, but stop growing much longer as time goes on. 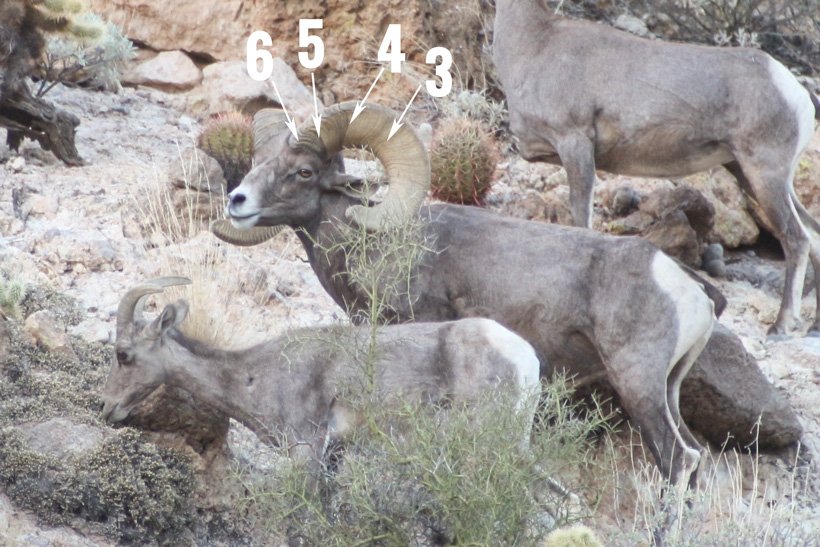 Other tips to look for older rams 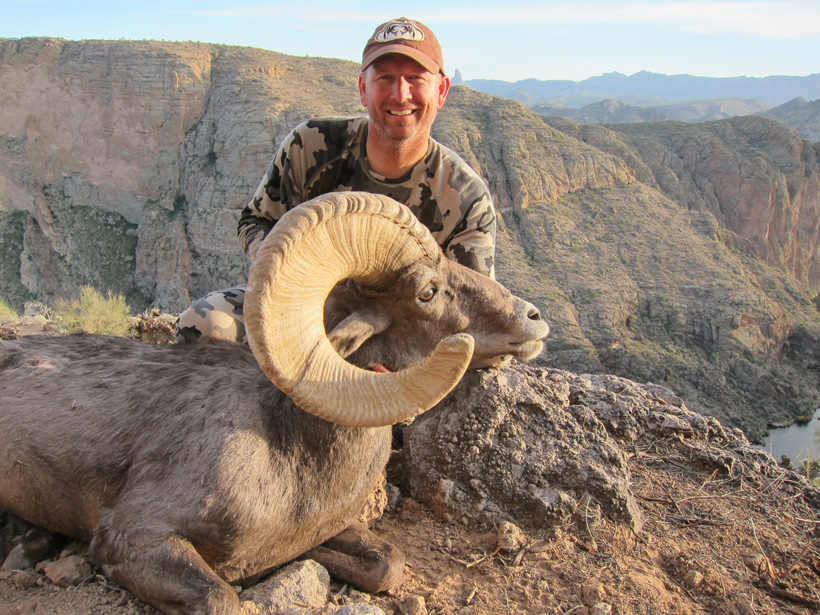 Jay with a nine year old desert bighorn ram from Arizona. Ram was shot by Ernie Meeske and scored 186 3/8″ net.

It is important to note that most biologists and many sheep hunters use a classification system to categorize bighorn rams. That classification is broken into four classes. 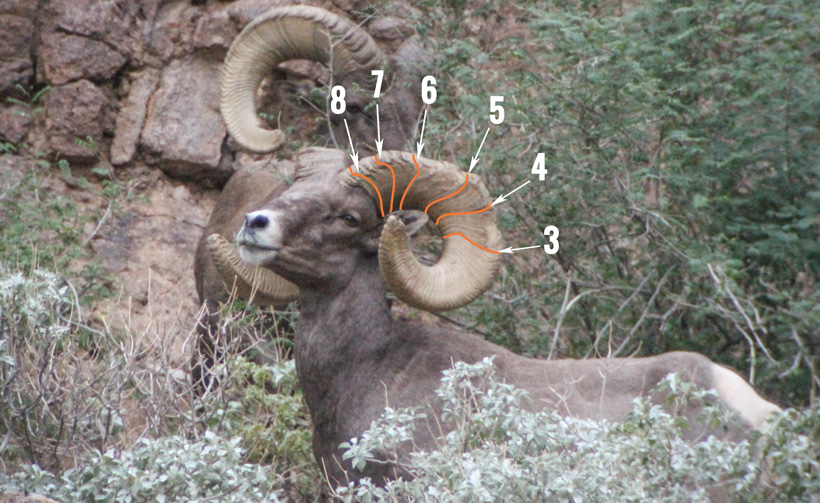 Aging bighorn sheep on the hoof can be extremely challenging. With practice during summer scouting trips you can start to become proficient in aging. It is a common goal to try to harvest the oldest and most mature rams that we can after waiting so long to draw a coveted tag. In summary, it is easiest to determine a rams age by finding the four year ring annuli and working back from that mark toward to the skull.

All photo credits: Jay Scott of Colburn and Scott Outfitters